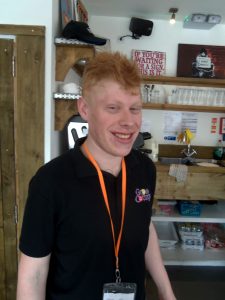 Harry is 18 and has a genetic condition which causes developmental delay. He has been coming to Grove Cottage since he was a young child and now attends our Youth Club, Get Active Club and Grove Cottage @ Thirst Cafe. Harry’s favourite thing to do at Grove Cottage however is volunteering as a minibus chaperone! Harry’s dad Graham drives the minibus for our Small Play Club and Harry enjoys helping him out and loves operating the tail lift! Harry’s future dream for when he is older is to be a minibus driver for Grove Cottage.

Harry’s favourite club at Grove Cottage is Youth Club because he gets to ‘hang out’ with his friends and he especially enjoys the occasional pamper night. He loves it when Youth Club go to the trampoline park but his favourite trip out is bowling and he always tries to get a strike.

For Harry, Grove Cottage is all about having fun and seeing his friends as without these weekly clubs there would be no opportunity to meet with them. When asked if he would recommend Grove Cottage he said he would because it’s so much fun. 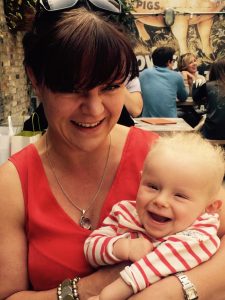 Sally-Anne How is mum to Ruben, two, who attends our Ofsted Regulated Special Needs Nursery four days a week.

Sally-Anne first took Ruben to the doctors in December 2016, but it wasn’t until May 2017 that a diagnosis was made. He has a complex condition which affects his development. Sally-Anne said: “Receiving this news about Ruben was horrendous and completely debilitating. I knew I needed to get help.”

Fortunately, Sally-Anne was told about Grove Cottage by a friend who thought we might be able to help. Sally-Anne says: “Ruben is stimulated and enjoys the social side of attending a nursery. He is always beaming from ear to ear when I pick him up and I see small differences in him every day. He enjoys swimming every week as well as organised trips, such as going to Cammas Hall Farm, meeting Father Christmas and day trips to the seaside.”

Grove Cottage has also given Sally-Anne a lifeline at a time when she needed it most. Whilst Ruben attends the Nursery she has been able to concentrate on her own work, studies and charity projects which would not have been possible otherwise.